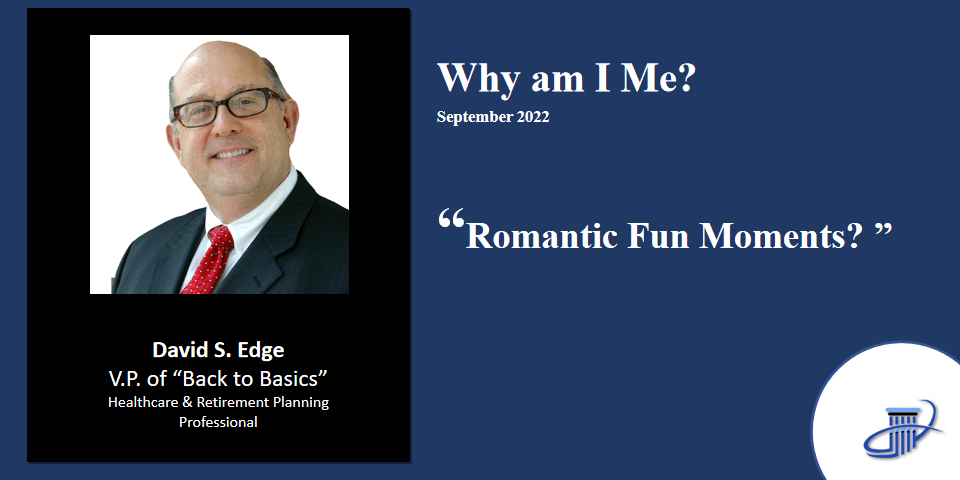 When you were courting your sweetie, what did you do to be fun or romantic? Sure, we all imagine flowers and candy, maybe even a nice dinner out. Or you went dancing or to a club? Maybe the romantic evening was a concert to see their favorite entertainer. Whatever it was you probably remember it being one of the most romantic things you’ve planned or experienced. Whenever and whatever it was made you…you!

Now just because you might think something you planned was the most romantic thing you’ve ever done; your partner might have other ideas. So, you might want to have that conversation sometime.

I had what I thought was one of the most romantic fun and exciting thing I’d done for my charming bride over our 40 years. But…I discovered I was totally wrong! I had asked her to lunch and had brought along a bag with a stuffed leopard inside and it had an envelope pinned to it. Inside were tickets to an African photography Safari! Out of all my memories, I would have thought that was “it.” The most romantic moment.

But it turned out that it was some of the small things she talked about. She mentioned the occasion I had gotten a nice bonus, and instead of just handing the check to her, I went to the bank and got cash in small bills. I piled the cash on the bed in our spare room. And when she got home, I handed her a note. It was a clue to where the next note was located. After visiting a dozen spots around the house, the last clue was to check the bed. But it wasn’t just the pile of money on the bed that she loved, it was the time I took giving her a treasure hunt!

Another thing was a simple cardboard Easter bunny I had made for her and had written “Good for a back rub anytime” on the back of the cardboard bunny. That was 20 years ago, and she still has it, treasured with love!

So a conversation about what romance means to your sweetie might surprise you. And those romantic experiences are parts of what make you… you!