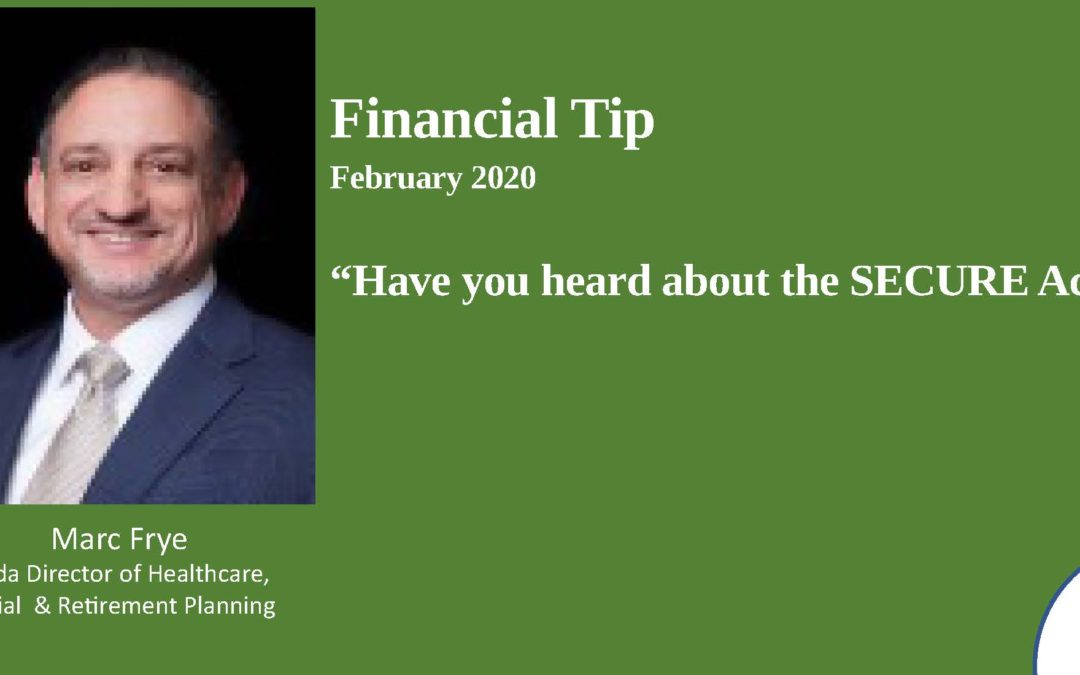 Have you heard anything about the SECURE Act? Well, the first week in January, President Trump signed the SECURE act into law. What does that mean to me, you ask? Well, it will inevitably effect most retirement savers, for better or worse. The SECURE legislation — which stands for “Setting Every Community Up for Retirement Enhancement”  puts into place provisions intended to strengthen retirement security across the country. It focuses on those who do not have access to workplace retirement accounts.

The SECURE Act is a nice thing — currently, anything we can do on a bipartisan basis is something of value. A few of the changes may be good but some of the changes can hurt savers such as incorporating annuities in 401(k) plans and eliminating the rule that lets account beneficiaries stretch distributions across their lifetimes.

The SECURE Act opens the gates for more employers to offer annuities as investment options within 401(k) plans. Currently, employers hold the fiduciary responsibility to ensure these products are appropriate for employees’ portfolios, but under the new rules, the onus falls on insurance companies, which sell annuities, to offer proper investment choices. Annuities aren’t in and of themselves bad. Some are fantastic and some are less than advisable. Especially when you’re left to figure them out on your own. Employees should review their options and consult a financial adviser before moving forward with a plan. Preferably not the company’s advisor but your own independent advisor.

Previously, qualified account holders, such as those with a 401(k) or IRA, had to withdraw RMDs in the year they turned age 70.5. The SECURE Act increases that age to 72, which may have tax implications depending on where the account holders fall in their tax bracket in the year they withdraw. The 70.5 age was based on life expectancies in the early 1960s, the House said, and had not been updated since.

The bill also eliminates the maximum age for traditional IRA contributions, which was previously capped at 70.5 years old. “As Americans live longer, an increasing number continue employment beyond traditional retirement age,” the House Committee on Ways and Means said in a summary of the bill. But be warned: Americans who turned 70.5 years old in 2019 will still need to withdraw their required minimum distributions this year, and failure to do so results in a 50% penalty of their RMD.

RMDs have also changed for non-spousal account inheritors. Under the current law, beneficiaries who did not inherit their accounts from a husband and wife are in some cases allowed to withdraw RMDs for the span of their lives, which could be a few years or a few decades. The amount of the distribution is calculated based on a few factors, including life expectancy and beneficiary age.

The SECURE Act requires beneficiaries withdraw all assets of an inherited account within 10 years. There are no RMDs within those 10 years, but the entire balance must be distributed after the 10th year. This change can be problematic for some beneficiaries, especially if they are in their 40s and 50s and at the peak of their earning years. Limiting the timeframe in which someone can distribute money from an inherited account means potentially boosting the tax burden those distributions will cause.

So, to sum up, there are changes that can affect you and your retirement. Feel free to ask your American Retirement Advisor for help. We’re here for you